Bashum (Kor. 바슘) was a werewolf and a subordinate of Maduke.

Bashum had pale skin, brown eyes and brown hair in a short bowl cut with the rest of his head being shaved. He also had some facial hair that, if grown out, would constitute as a goatee. Sometimes he was shown wearing a monocle over his left eye and he wore a white hooded robe with white pants. His figure was slim in comparison to people like Kentas and Gaitan but he was still bulky when he powered up.

He listened to commands and followed them well, respecting Zaiga and Maduke. Despite this, he appeared to be opportunistic and didn't take nobles as a serious threat like most warriors which was shown when he attacked Raskreia[1].

As a warrior he had to train though it is unknown if he was a true warrior or only became one after modifications. He was aware of Zaiga having competed with Maduke and Muzaka for the position of lord[2].

Bashum insulted Kei, Raskreia and Raizel upon first meeting them with Gaura, but was reprimanded by Zaiga for doing so. They were both shocked upon hearing of the identities of the three nobles and objected to Raizel leaving but Zaiga told them to let him through so they did as he said. When Rozaria attacked the castle, Bashum was shocked. As Zaiga faced Kei, he was impressed by Kei's strength against Zaiga[3].

Bashum watched the battle between Kei Ru and Zaiga and thought Kei was terrifying, shocked that he held out this long. He wondered if all the noble clan leaders were this strong. He also wondered if he should leave everything to Zaiga like this. Noticing Raskreia watching the battle, he thought he might be able to get rid of her while she was distracted which would also increase his position among his people and would get Zaiga to acknowledge him. He failed however as she used mind control to slow him down and attackd him with Ragnarok. Bashum fell to his knees screaming in pain[4].

Muzaka then arrived. Bashum watched Muzaka and Zaiga fighting and was worried to see Zaiga being pushed back. After Muzaka slashed Zaiga to pieces, he was left stunned[5]. He went to report the event to lord and was confused when Muzaka mentioned 'a man with a temper'[6]. The report of his team's death only occured later[7].

When Maduke was going from his second to third form due to Muzaka's strength, Bashum was shocked along with the other warriors as he had thought the lord had been defeated. The absorption of his energy through the bloodstone in his chest by Maduke incapacitated him along with the other modified werewolves[8]. They remained immobile throughout the battle. Only when Maduke was killed did they recover. Like the others he expressed shock at the loss and was also ashamed of his actions but went to help his people after Kentas' scolding[9].

His next appearance was when all the surviving warriors gathered to ask Kentas how Muzaka was. They also talked about how they would serve their people[10]. Then he gathered with the other warriors when the defense systems went down and split up to investigate. Bashum came across two of the Royal Guard and battled them briefly before running away. He came upon Mirai who was also retreating and decided to stay behind to fight so that she could escape with the civilian she was carrying[11]. His and Gotaru's corpses were dumped on the ground by the Royal Guard in front of the 1st Elder. Haydn criticised their strength[12]. Their bodies were shown throughout the ensuing chapters.

In a flashback where Maduke was creating the competitive spirit amongst the warriors, Bashum was shown in the crowd. Then a scene after Maduke's death was shown where the warriors discussed how they were wrong and decided to help their people[13]. Images of Bashum and Gotaru were shown as Mirai died[14].

Bashum does not feature in Rai's Adventure.

Bashum does not feature in Noblesse S.

Bashum does not feature in the Beginning Of Destruction OVA.

Bashum does not feature in the Awakening OVA.

Bashum was a powerful werewolf as he was a warrior. 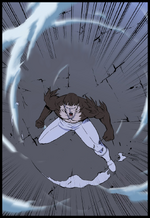 Like all werewolves, Bashum couold transform his body into a much larger, more muscular and overall a more wolf-like form. When transformed, his physical abilities and senses were greatly enhanced.

As a werewolf, Bashum possessed enhanced strength and speed which were improved on further after going through modifications.

As a warrior, Bashum possessed an immense amount of spiritual energy that was equal to clan leaders.

Retrieved from "https://noblesse.fandom.com/wiki/Bashum?oldid=76571"
Community content is available under CC-BY-SA unless otherwise noted.