(1) Crombel comes back at Union base to capture M-21 and notices the presence of Frankenstein on rooftop.
(2) Crombel has taken over the Union and plans on wiping out humanity. Frankenstein vows to stop him, after Crombel uses an attack satellite to attack his home and makes Raizel use his powers.

(1) On the rooftop of the ex-Union base, South Korea.
(2) An arid desert wasteland, where Crombel has been hiding.

(1) The two abandon battle as humans start to gather around the place.
(2) After Crombel uses the Blood Stone to gain more power, an exhausted Frankenstein begins to struggle. Just as Crombel gains the upper hand, the RK show up.
So far in the Manhwa Frankenstein has faced Dr. Crombel twice.

Dr. Crombel and Frankenstein meet and fight on the rooftop of the ex-Union base.

Having initiated the destruction of the Union base in South Korea, Dr. Crombel leaves the city in his private helicopter but M-21's return to the base makes him change his plan and he comes back to capture him. His pilot notices someone standing on the rooftop of the base and Crombel assumes that he's the one responsible for Mari's death. He gets off the helicopter after introducing himself. Frankenstein refrains from introducing himself but Crombel tells him that he has a general idea of who he is, mistakenly calling him a Noble. He adds the idea of experimenting on Frankenstein to which Frankenstein asks him if he has what it takes.

Dr. Crombel tells Frankenstein that he will know the answer to his question shortly as he jumps toward Frankenstein. Frankenstein also jumps toward Crombel and a huge explosion results from the clash of their similarly extensive aura. They land on the rooftop and suddenly feel a different aura from the battle underground. Crombel senses that the Infected has been killed and leaves.

Crombel senses the Infected's death and immediately concludes that Frankenstein has another ally besides M-21 thinking that the failed experiment would not be able to handle the enhanced strength of the Infected. He bids farewell for the moment and Frankenstein hurries back to his Master.

Frankenstein breaks down the doors of Crombel's hideout. Crombel is impressed by Frankenstein and his abilities, he asks him about his powers. Frankenstein berates him for being an amateur and reprimands him for daring to evaluate him. Crombel realises that Frankenstein is the original author, of the journals and the owner of the ruins, where he found additional data, upon which he has based his life's work.

Crombel recounts his past, and praises Frankenstein calling him his Master, and showers him with compliments. Frankenstein finds this rather vulgar, coming from someone like him. Frankenstein calls him a thief for stealing and manipulating his data to produce the monsters he's created. Hearing Crombel talk about becoming God and destroying the human race, Frankenstein is certain of what he needs to do and the two attack each other head on.

As the battle between Crombel and Frankenstein rages on. Crombel and Frankenstein trade blows, but are evenly matched in terms of strength. Crombel launches a head on attack against Frankenstein, which Frankenstein blocks, although is sends him plummeting to the ground. Frankenstein lands firmly and continues his assault by launching several dark matter tentacles at Crombel who does the same. The dark powers clash mid-air causing a massive explosion. Before the smoke clears Frankenstein launches another attack and pushes Crombel back. He then follows up with a more powerful attack, sending Crombel crashing into the ground. Frankenstein lands, and notices his injuries. He says he didn't expect Crombel to counterattack, just as he attacked him. Crombel says he's amazed that Frankenstein can control the unstable Dark Power to such an extent and that he's starting to admire him even more.

Frankenstein digs his Dark Spear into the ground as he catches his breath. Dr. Crombel notices Frankenstein's fatigue and comments that it would appear if their battle has come to its end adding that although everything he's achieved has been due to Frankenstein's legacy, here he is now standing taller than Frankenstein. Crombel continues to boast now he is towering above everything Frankenstein has accomplished, including surpassing his mentor in power, there is no-one's opinion he'd value more than Frankenstein's. Frankenstein responds that Crombel's full of himself, stating he's exhausted from searching for him for several days and then he had to fight with Crombel's handmade bodyguards, while Crombel has been sitting back and relaxing until he had no choice but to face him, and asks if Crombel has no shame, by spouting rubbish such as, surpassing him. Frankenstein adds that if he wants to hear his opinion so badly, he'll tell him exactly what he thinks. Frankenstein chides that he's nothing but a thief and a psycho, who stole his research, not to mention he's gifted at back-stabbing and that while he's at it, he'll relay his thoughts on Crombel's plan, mentioning how he wanted to become God, Frankenstein asks him to listen up and states that his plan is doomed to fail, and he doesn't know about God, but he's make a fine psychopath. Crombel gets angry and allows the Dark power to consume him taking on a purple appearance similar to Frankenstein's. He is enraged that Frankenstein would hold such a low opinion of him, just because he considers him his Master and attacks Frankenstein wounding him, however, as the smoke clears Crombel is also wounded. Crombel wonders how as Frankenstein was able to injure him. Frankenstein stands there holding the Blood Spear, and comments that he'll be sure to send Crombel to hell. Crombel grits his teeth.

Having realised that he's frightened, Dr. Crombel gets angry, unable to take the humiliation any longer. Crombel starts gathering his energy, having no other option, he summons the Blood Stone. Dark Frankenstein is shocked to see Crombel using the Blood Stone. The Blood Stone allows Crombel to transform, into a larger more powerful creature. Crombel laughingly states, he now realises why the Union, the Werewolves and Traitorous Nobles, did everything in their power to learn more about the Blood Stone and understands why none of them could resist the allure of using the artifact, even though its power is a mystery. Crombel remarks that it must be because it gives its wielder the power of a God. Dark Frankenstein tells him he's talking rubbish, and launches Dark Spikes at him. Crombel replies it's futile to fight him, since he now possesses the power of a God and fires a Dark Energy beam at Frankenstein.

Dr. Crombel announces it's unbelievable, that even now as he possesses the power of a God, somehow Frankenstein is still standing against him. He realises more and more that as their fight continues, Frankenstein truly could have been God of the old world, but not anymore since he's going to be the God now. He comments that he is revitalised by his new powers as Frankenstein is tired and worn out. Frankenstein thinks Crombel's right and decides to finish this quickly. Frankenstein rushes to attack Crombel head on as Crombel does the same. The two collide and trade blows, with Frankenstein being pushed back.

Frankenstein continues to struggle as Crombel gets ready to deal the finishing blow, stating it's time for his grand finale. Before he can attack, the RK intervene, and take over the battle allowing Frankenstein to regain his strength.

Dr. Crombel introduces himself to Frankenstein.

The two scientists meet each other. 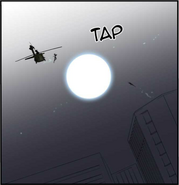 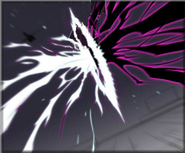 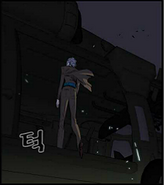 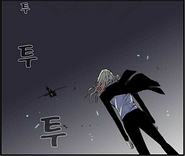 Dr. Crombel poses for the camera. 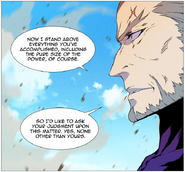 Frankenstein lays into Crombel and his asinine plans.

Crombel transforms after being belittled by Frankenstein. 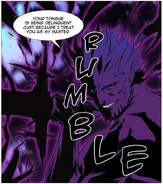 Crombel wonders how he ended up wounded. 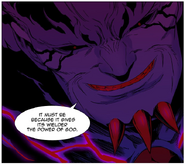 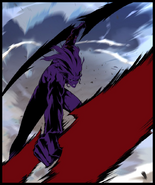