The Cetus/Leviathan. In the Greek language, the word ketos (Greek: Κῆτος, Kētos, plural cetea, Greek: κήτη)—Latinized as Cetus—denotes a gargantuan fish, a whale, shark, or a sea monster. The sea monsters slain by Perseus and Heracles were each referred to as the Cetus by ancient sources. The term cetacean originates from Cetus. In Greek art, cetea were depicted as serpentine fish. The name of the constellation Cetus derives from this word. Leviathan(Hebrew: לִוְיָתָן) is a sea monster referenced in the Tanakh, or the Old Testament. The word has become synonymous with any large sea monster or creature.

The emblem of the Kravei clan can shift to a different being depending on the owner of the soul weapon. 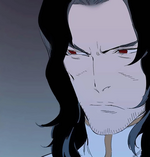 Roctis Kravei, father to Ignes and was a traitor clan leader. He was forced to eternal sleep by the Noblesse.

The Kravei clan was excommunicated from Lukedonia due to Roctis' fierce defense of his daughter despite her inhumane and atrocious deeds that violated the code of the nobles. To prevent the execution of his daughter, Roctis agreed to the plan to kill the Noblesse.
Retrieved from "https://noblesse.fandom.com/wiki/Kravei_Clan?oldid=74441"
Community content is available under CC-BY-SA unless otherwise noted.