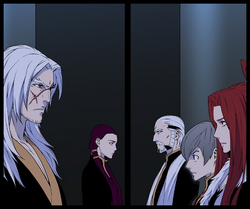 The Nobles (Kor. 귀족) are an ancient and powerful race that possess great strength, speed and telepathy as well as various blood related abilities, such as the talent to grant similar powers to others via contracts "of blood and soul". They reside on an island nation, known as Lukedonia, that cannot be detected by human senses. They have guarded humans against predators and the forces of nature as long as they have existed, due to a genetic inability to ignore the slaughter of the weak, helpless humans. Thousands of years ago, they were worshipped as gods by various cultures around the world.

The nobles are also sometimes referred to as the Noblesse race. Although the proper name of the race is "noble", gradually along the centuries, humans and nobles alike have come to refer to the race as a whole by the term "Noblesse". However, this is a distortion of the original meaning of the word. The True Noblesse is a title given to only one person and not the entire race as a whole.

The word "noblesse" comes from the French phrase noblesse oblige, which translates into "nobility obliges" . The meaning of this phrase is that those with power--the nobility--must conduct themselves accordingly and use their power responsibly, particularly to help others.

Common traits among the nobles, aside from the strength and speed mentioned above, include extremely long lives, mind control abilities, crimson red eyes, and a shared code of honor and conduct.

From Nobles' perspective, eternity and life are synonymous due to their incredibly long life spans: A noble undergoes their coming of age ceremony when they are 200 years old and, at 500 years old, they appear to be in their early teens. In fact, no noble has been known to die of natural causes; nobles have only gone to "eternal sleep" (self-initiated death) or been sentenced to "forced eternal sleep" by Noble authorities. It is unknown whether eternal sleep is a euphemism for death or if it is separate process from death altogether.

Nobles, while uniformly stronger than humans, display great variance in their powers. Particularly, mind control, the signature ability of nobles, ranges from stopping a single modified human for a few seconds (when used by a young, pre-adult noble) to complete domination over several noble clan leaders at once (when used by the Noblesse, the strongest noble in existence). Additionally, not all nobles possess blood abilities. For example, nobles can grant lesser beings power by making a contract with them, which involves exchanging blood. While it seems many, if not all, Nobles can make contracts, only the Lord and the Noblesse have been shown to truly wield blood abilities in battle, an ability referred to as governing blood.

Another ability possessed only to Pureblood Nobles, they can easily identify a modified humans from the normal humans. Regis, Gejutel and Rael are the examples when they able to identify M-21, Tao and Takeo as modified humans while the knights from the Central Orders couldn't.

However, unlike ordinary humans Nobles' reproductivity seems to be not as active: with the exception of Kertia Clan and Raizel who had an older brother, Nobles shown in the webtoon appear to be only children themselves.

There are two pillars that govern, influence and embody Noble society: the Lord and the Noblesse. These two figures appear to be equal and can override each other's decisions and actions. The Lord symbolizes authority and is the public face of noble society. The Lord rules over virtually all of Noble society, their affairs and commands absolute obedience from all other members of the race, except for possibly the Noblesse.

The Noblesse symbolizes strength and is the hidden protector of the noble race, from internal and external threats. The Noblesse is also a symbol of justice, acting as the judge of all Nobles, and reserves the right to execute anyone whom he deems in violation of the traditional Noble Code. Though the Noblesse is hidden from all but the very highest echelons of noble society, he is the strongest member of the noble race and serves to protect the race from any internal or external threats.

Aside from the Lord and the clan leaders, any other further hierarchy is unclear. However, it is known that purebloods from the clans (that is, family members of the clan leaders) wield exceptional power and likely have unofficial power and influence, even if not given an official station. The rest of the Nobles are likely ceremonially initiated into a clan from birth and do not have a 'pure' bloodline.

Additionally, there are several orders of knights comprised of exceptionally talented nobles. Each order of knights reports to a clan leader and serve as their clan's domestic law enforcement unit. These orders are all under the collective authority of Lukedonia's main (and most likely only) military force and intelligence agency, the Central Order. They also have the responsibility of handling the administration and preservation of the sacred homeland of the Nobles, Lukedonia. The Central Order is led by officers who answer directly to the leader of the Mergas Clan, whose authority is only superseded by the Lord, who handles the most important executive decisions.

The Nobles' nominal blood ability (at least for virtually all members of the race, excepting the Lord and Noblesse) have led humans to draw comparisons between the nobles and vampires.

Objects like wooden stakes, garlic, crosses and other stereotypical anti-vampire items used by humans are ineffective against nobles and are considered an insult to them. This was demonstrated humorously several times by nobles such as Raizel, Raskreia and Gejutel when they saw ramen for the first time and misinterpreted garlic and chopsticks (miniature wooden stakes) as attempts on their life.

Retrieved from "https://noblesse.fandom.com/wiki/Nobles?oldid=73256"
Community content is available under CC-BY-SA unless otherwise noted.