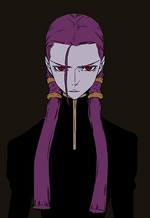 Lagus Tradio
(Forced into eternal sleep by the Noblesse)

The Tradio clan is one of the clans who betrayed the previous Lord and Raizel. It is actually revealed that only Lagus Tradio from their clan betrayed Lukedonia and their clan members were surprised that their entire clan was branded as traitors after finding out after the invasion. Surprisingly, even with the betrayal of its leader, the Tradio clan still displays its loyalty toward him after his return, unaware of his betrayal and plans.
The Tradio clan is the first and only traitor clan to be pardoned by the Lord.
Retrieved from "https://noblesse.fandom.com/wiki/Tradio_Clan?oldid=74450"
Community content is available under CC-BY-SA unless otherwise noted.