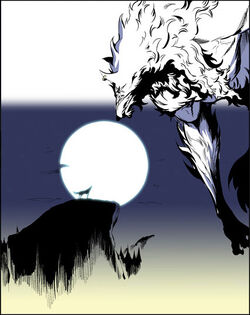 Werewolves are one of the existing species on the planet. Back in the ancient past, they maintained the balance of power with Nobles. However, they were comparatively weaker than nobles. After the decline of nobles in power, the werewolves became the strongest species on the planet under the lead of Maduke. Werewolves are aggressive and warlike in nature.They flaunt their powers and desire to rule the world. They believe that those who are strong have the right to rule the weak. This is evident in their culture. They choose their leaders based on strength, with their Lord being the strongest of them all.

Warriors are an elite group of combatants within the werewolf society. They function as leaders and protectors of their race. Warriors are recognized by merit of prowess. Those who are strong and powerful are chosen as warriors.

Hundreds of years ago, Muzaka was the Lord of their race. Though he was the strongest, he held no real political power. His people were disgusted with the way he lead them. He believed that the werewolves should not engage in battles unnecessarily and urged his people to stay away from the humans. In addition, he was prone to long periods of absence from his people as he constantly traveled around the land. As a result, many were disillusioned with him and instead looked to Maduke, who was his second in command. Maduke was charismatic and cunning, and he took the opportunity to gain influence over the werewolves. While Muzaka was away, he encourages the rest to take part in the human wars, and the werewolves began to gain influence and power over the humans. As a result, he became the true leader among the werewolves, with Muzaka relegated to no more than a figurehead.

When Muzaka disappeared after his battle with Rai, Maduke took the opportunity to take control. He and his followers killed and captured many of Muzaka's followers. As a result, there were less to none werewolves in support of Muzaka. Maduke officially became the Lord at this point, and spread rumors that Muzaka was a traitor, to further consolidate his power.

Under his lordship the werewolves became more active, embracing human technologies and getting involved more in human affairs they became more powerful as a result. However this was done at a price. The weaker members of the race were exploited and sacrificed to be used as specimens in various experiments. These experiments enabled the stronger members of the race to become more powerful. The leadership became corrupted, with the warriors in tow. Once protectors and leaders of their race, their values were twisted, with most deeming the sacrifice of their fellow members necessary to protect the race. In their quest for power, they abandoned the tenets which made them warriors. No longer do warriors train and hone their strength constantly to overcome their limits. Instead, warriors rely on the new technology, which gives them much power. This however makes the warriors much weaker, as they are no more than brutes with more power, rather than the warriors of old, whom despite having lesser power, are more skilled in the use of their powers.

Werewolves are warlike and have superior regenerative powers (higher than Nobles). They are said to rival Nobles in terms of raw power.

The strongest being in their race becomes their ruler and is known as "Lord". Next in power are "Warriors" who are the strongest members of the race. Warriors are responsible for leading and protecting the weaker members.

The current lord of werewolves has high standing in the Union by his role as 2nd Elder. Lunark, a warrior, is the 5th Elder of Union. As stated earlier, Werewolves adapt with the changing times and accepted the physical enhancement technology of humans. However, becoming overconfident with their newfound power, most werewolves who became stronger through physical modification stopped striving for self-improvement and thereby unable to maximize their potential. (i.e. Drakun vs. Kei Ru)

Subsequent chapters revealed that there are two categories of Warriors: Ones who obtained their statuses after having physical modification experiment, and those who already achieved the status of warrior even before undergoing experiments. It was the former faction that displayed underwhelming performances thanks to their lack of experiences and eligibility due to lack of self-improvement born of overconfidence as warriors.

While Nobles have clans, werewolves have something akin to clans called crews. A crew consists of four individuals led by a leader warrior.

Retrieved from "https://noblesse.fandom.com/wiki/Werewolves?oldid=72601"
Community content is available under CC-BY-SA unless otherwise noted.